Getting Juno to Jupiter with Earthsafe

“What do you do Here” is a question we always ask, being naturally curious engineers.  Sometimes we get interesting answers.  We recently completed a new fuel system for a data center upgrade in Colorado.  The answer we got was that amongst other things “We are sending a spacecraft to Jupiter – it just arrived”

Here is the local news story:

After traveling for five years, the Juno spacecraft is about to encounter the riskiest moment of its 1.7 billion mile journey. On Monday night, NASA and several Colorado companies will learn whether they have pulled off a major mission to Jupiter. The Juno spacecraft is set to go into orbit around the largest planet in our solar system.

“Juno is going to go into the scariest part of the scariest place,” said Heidi Becker, Juno Radiation Monitoring lead investigator. That scary place is Jupiter’s orbit, where Juno will face two major threats to its survival. The first is massive amounts of radiation – millions of times stronger than anything we see on Earth. The second potential problem for Juno are rarely-photographed rings around Jupiter. They are made up of dust and meteorites, all of which could hit Juno and damage it.

The spacecraft – designed and built by Colorado’s Lockheed Martin Space Systems – is equipped with titanium shielding designed to protect it from both dangers. All of this is being done in the hopes that Juno will uncover the secrets of Jupiter below its clouds and provide a definitive explanation to how the solar system formed.

If Juno survives, it will go where no human spacecraft has gone before and as it travels at 165,000 miles per hour, it will become the fastest manmade object ever.

“It’s not without risk, but we have some of the world’s best engineers working on this,” Bolton said. 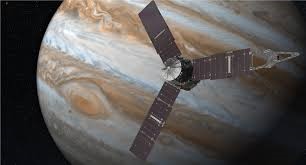